We Are the Dead by Mike Shackle 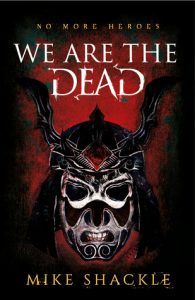 I enjoyed my time with Mike’s We are the Dead, although not quite as much as I thought I would. On paper this debut series had everything I look for in a gritty fantasy novel: its simple prose and fast-paced storytelling, its medieval realism with a dash of oriental influences and a smidgen of magic, its myriad cast of broken characters … there’s a lot to like, but unfortunately the different pieces never quite clicked together in a way that worked for me.

An undeniable strong point of We are the Dead is its setting. Sure, plenty of other fantasy novels take place in a land where the enemy has won and the people are oppressed by their new rulers … but Mike has taken all those previous books, set the entire pile on fire and is now laughing evilly over their burnt ashes. Never has a tale of occupation and resistance been told so vividly. The people of Jia are not just oppressed, they are subjected to daily beatings, tortures, rape, and murder. The occupiers (The Skulls) are portrayed as a vicious race of sadists, each and every one of them a vile human being, so much, in fact, that it occasionally stretches the limits of plausibility.

So, what didn’t I like? I thought some of the torture scenes were repetitive and superfluous. I’m not at all squeamish (my own novels are pretty violent), but I find it best when violence, torture, rape etc… are used impactfully to advance the plot, which isn’t really the case here and consequently comes across as a bit gratuitous.

I also had difficulty identifying with most of the characters. Jax was probably my favourite, whereas a lot of the others were a bit of a one-trick pony; cobbled together from well-used fantasy tropes (the cowardly soldier, the disgruntled orphan etc..). There’s even a world-weary sorcerer whose main task is to do a bit of world-building and dole out the all-important MacGuffin that sends one of our POVs off on her questline.

Lastly, some of the swearing (there’s a lot of it!) I found it to be a bit anachronistic and took me out of the story (Characters shouting bollocks! in tense situations especially).