The Ten Thousand by Paul Kearney 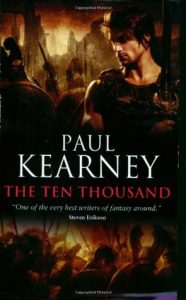 I was originally drawn to Kearney and his “The Macht” series after hearing people compare him to Steven Erikson or David Gemmell, two of my favourite authors. After finishing the Ten Thousand I’m not quite sure he reaches these lofty heights but he’s definitely not far off!

Unfortunately the premise doesn’t sound all that interesting : a group of mercenaries find themselves in foreign lands fighting to win back the crown from the Emperor’s brother. Yet Kearney avoids most of the done-to-death military fantasy tropes by focusing on four or five characters on either side of the conflict from the strategists, to the generals and on through the ranks all the way down to the new recruits.

The themes of heroism and survival against all odds that are the staple of most of Gemmell’s books are missing here – The Ten Thousand focusses more on the absurdity of war, death, loss and redemption. Consequently it’s a bit more heavy going but ultimately more satisfying and the low-key ending is all the more impactful.

Luckily with two more books to go there is plenty more of The Macht for me to see and I’m looking forward to seeing where they will take me next.