The Poppy War by R.F. Kuang 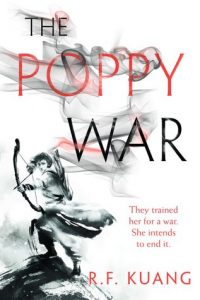 So, this was a really difficult one for me to review.

It did not start well. For several hundred pages (close to half of the entire book) the story follows Rin through her formative years at Sinegard military academy. There were so many tropes here I was nearly crushed by their prodigious weight. Poor, innocent pariah? Check. Shunned by her fellow students save for a band of motley outcasts like herself? Check. Climatic showdown with one of her bullies? Check. Picked on by her teachers for her social status? Check. Except of course one of the quirky, older teachers who takes her under his wing. Oh, and there’s a brooding, sultry, older student who gives her the occasional smouldering look …

It’s not that it’s bad in any particular way, it’s just been done so, so many times before, in everything from The Name of the Wind, to Blood Song, to, well, Harry Potter.

Then, suddenly, it becomes a completely different book. What started off as a mellow coming-of-age story veers off that nice, complacent, well-trodden path and careens off down a twisting trail of violence and death. The writing becomes more insistent – more personal, even – and the pace rockets forwards, dragging you from revelation to revelation until it reaches its satisfying conclusion.

I found this second, darker part much more appealing as it plays directly into my love of military fantasy and darker themes. What Kuang manages to do differently here is focus on the terrible consequences of war, far more so than war itself. Towards the tail of the novel Rin is no longer at the forefront of the defensive line, but arrives after the battle is lost, and can only weep at the terrible carnage the enemy has left behind.

The prose here is brutal. Everything is described in great detail, whether we want to read about it or not. Dismemberments, rape, extremely violent child death, slavery etc… the list goes on and, of course, has no trouble producing the desired effect: we believe in Rin’s anger and hatred, and we want to see her take her revenge, no matter the cost.

Lastly, the world-building, inspired by Chinese Mythology and History (sometimes a little too heavily), is excellent, as is the magic system and the consequences of entering into pacts with uncaring deities we do not fully understand.