The Illusionaires by Brian Marshall 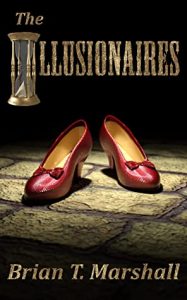 Brian has created a fascinating alternate universe with his debut novel, The Illusionaires. Imagine a world nearly identical to our own, only some of the magicians there – the crème de la crème – have managed to transcend sleight-of-hand and fancy parlour tricks to attain something even more fantastical: real magic.

And if real magic exists – and has been around since the dawn of time – then some of history’s more unplausible successes suddenly seem more believable. We learn, for example, through casual conversation, that Hannibal may have used magic to get his elephants over the Alps, or that the battle of Trafalgar was only won thanks to a magical helping hand.
Brian never goes into detail as to how such a thing exists, or even really how it works, only that different magicians have different talents; and that it is both physically and mentally draining to use. To me it’s the right decision, the reader is trusted to piece things together as we go along, letting the story take centre stage.

And what an interesting story it is! We follow three such gifted people – the titular Illusionaires – over a period of roughly thirty years, from the Golden Age of Hollywood, to the late sixties: a time of international struggles and internal political upheavals. It’s difficult to go any further into the plot without spoiling some of the better twists and turns, but suffice to say that Brian explores how illusion, invisibility, and physical manipulation can be used to shape current events – for better or for worse.

It’s a great tale, made only better by Brian’s superb prose. This does not read like a debut novel. At all. We’re reading the work of a seasoned pro, with strong, well-detailed characters and a vibrant, believable world, something that is always especially tricky to do when writing alternate history, but Brian pulls it off without breaking a sweat.

My favourite part of the novel is actually the first third, set in late thirties’ Hollywood. You can tell Brian has done his research here, as we are taken on a tour of MGM’s studios, offices and surroundings. The descriptions really pop, and I could easily read a whole novel set in 1938!
The novel ends by tying up most of its loose ends, but there is still enough room for a sequel and I really hope we get one. I, for one, am dying to know how the Cold War would evolve if a bunch of magicians were thrown into the mix!