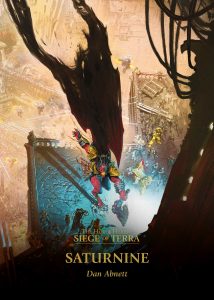 With each successive novel, Dan’s writing got better and better, and I found myself pre-ordering everything he wrote as soon as it became available. This started to worry me. No one could have such a flawless track record. At some point, he was bound to fail.

Horus Rising was released in 2006. I was still worried. An entire new timeline? Tackling the Horus Heresy, a thousand-year saga? And we know how it ends? Once again, Dan rose to the challenge with aplomb, and his five contributions throughout the 53-book series were easily among my favourites.

Now, twenty years after reading First & Only, I’m in my forties and I’m still worried. Dan has been conspicuously absent from Black Library for several years (due to illness, scheduling, and poor management if I read between the lines correctly), with only two full length novels (Anarch and Penitent) released in the last five years. I felt worried again. Has he still got it?

I should probably stop worrying. Saturnine is a masterpiece, an amazing culmination of his work throughout the Heresy and the Sabbat Worlds Crusade. The premise is simple: the siege has reached a point where there are four obvious weak-points in the defensive line. Dorn knows this. Perturabo knows this. Dorn also knows he doesn’t have the resources to hold all four. One will have to be sacrificed so the others can resist.

This is a great idea, and allows us to jump between the various battlegrounds seamlessly without having to check a map of the Imperial Palace every five minutes. Another great idea is how we, as a reader, discover the story from a myriad of different perspectives, from Dorn and Malcador themselves, all the way down the ranks through primarchs, generals, senechels, space marines, remembrancers, to the lowly guardsmen on the firing steps. We also get a few small but insightful fly-on-the-wall moments with the Chaos Legions and the Mourneval.

The plot is fairly predictable, but the Horus Heresy has never really been about the endgame. It’s always been about how we get there, and how this diverse cast of hundreds upon hundreds of characters built up over fifteen years live out their final days.

The novel ends with a nice play on the dual meaning of the word Saturnine, and adds a few more pieces to this massive, spiralling puzzle.

At the time of this review, we do not yet know the authors assigned to the final three books. It would be beyond amazing if Dan was the one to wrap it all up, especially as his first book defined the tone of the entire series. If that doesn’t turn out to be the case, then his last foray into the Heresy will be Saturnine and, as one of Dan’s best works, that’s fine.