Kings of Morning by Paul Kearney 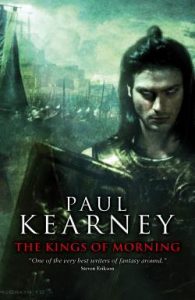 After really liking “The Ten Thousand” and being very disappointed with “Corvus” I picked up the third and final book in the trilogy with some trepidation.

“Kings of Morning” sits somewhere between the two. The characters are way more interesting than the cardboard cutouts from “Corvus”, especially the world-weary Asurian Emperor and his two sons vying for the throne. As I progressed through the book I actually found myself looking forward to the viewpoint of these new Kefr characters more than the parts focussing on Corvus and his long, boring, trudge through the Asurian Empire. In fact if he hadn’t featured in this book at all it wouldn’t have bothered me!

A slightly mellow and abrupt ending closes out this final book and while I’m pleased I stuck with these three books until the end I’m not sure I’ll be heading back to Rictus and friends any time soon.