If It Bleeds – Stephen King 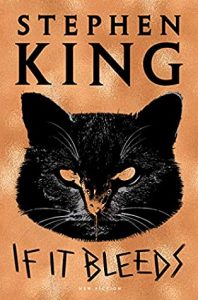 If It Bleeds is a collection of four novellas with common themes of death, change and the hardship that comes with it, things so prevalent in King’s later works. I wouldn’t say I’m a King superfan, but I have read most of his novels and as an author am somewhat in awe of his incredible productivity. He’s a bit of what I’d call a ‘Netflix writer’. He puts out loads of stuff across a range of genres and most of it is good.

My favourite King stories by far are the earlier ones, the pure horror of ‘Salem’s Lot or the (sometimes over-pretentious) apocalyptic drama of The Stand are among my favourite books of all time and helped me branch out from reading fantasy into new and wonderful things.

Consequently, the two stories that bookend this collection, Mr Harrigan’s Phone and Rat are the ones I enjoyed the most, maybe because they read like vintage eighties or nineties King. The first mixes otherworldly hauntings with our increasing reliance on technology. The second, Rat, is an amazing twist on the classic Monkey Paw/Deal with the Devil trope that everyone — not just authors — will be able to identify with. You know that feeling when you are so close to doing something, be it finishing a novel, or scoring a touchdown, or winning a race … you just need that little extra push … What would you sacrifice to obtain it?

The other two stories that make up the collection, The Life of Chuck and If It Bleeds, I was less impressed with. The Life of Chuck reads like King had three separate ideas and tried to weave them together into a cohesive whole, with middling results. If It Bleeds is more an investigative thriller with a smidgen of horror, just like the other books in the Mercedes/Outsider trilogies. Holly is a well-written character, but the plot was far too slow and meandering for my taste.